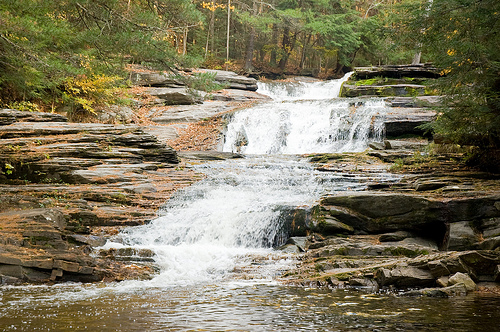 ”Clayton, Hartsville, Mill River, Southfield & New Marlborough Village, each of these is an entity; each is conscious of its individuality.  New Marlborough Village, proud of its typically New England houses clustered about an equally New England church.  Southfield, with its own New England church and with the factory that provided employment for many residents of the town.  Mill River, boasting the Town Hall, and the Town Library, with not one, but two churches.  Hartsville, where the Umpachene Grange was located.  Clayton, now a residential community.

New Marlborough is named after Marlborough is Middlesex County, whence came its proprietors.  The name comes from Marlborough, England, which was so-called from the celebrated Saint Maidulf.  The earlier name was called Madluf's Borough which as shortened to Mailsborough; and after marl or clay was discovered in the neighborhood the spelling was altered by mistake to Marlborough, its real origin being forgotten in the process of change.  It is a singular coincidence that clay was also discovered in our New Marlborough, in its village of Clayton. Adapted from "Berkshire County, Is Past History and Achievements", by Charles J. Palmer.”